For a quick little Halloween post I’ve selected a story from Max Brook’s “Recorded Attacks” graphic collection of historical zombie attacks.  It’s about the zombie siege of Fort Louis Phillipe in North Africa, 1893.  I’ve always thought that the Foreign Legion/North African-Pulp genre would lend itself well to the supernatural.  There is an element of mystery in the vast Saharan Desert as well as numerous superstitious folk tales involving evil spirits and the “djinn” throughout the region.  Pretty much uncharted territory here–after all the hero (Brandon Frasier) was in the Foreign Legion in the beginning of “The Mummy”. 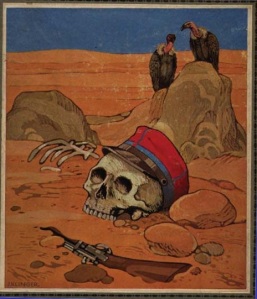 Retired Army.
View all posts by Jack Wagner →
This entry was posted in Book Extracts. Bookmark the permalink.