This piece was an article for the magazine Overland Monthly.  It was published in the December 1917 issue.  (Note:  The article also appeared earlier in The Living Age of 28 April 1917.   I posted the Overland Monthly one because it is easier to read).  It’s a standard review of the Foreign Legion and has several interesting takes on Legion lore and legends such as marching, punishment and the cafard.  It also mentions COL Elkington towards the end of the article.  This article came out at the height of WWI as America was slowing moving towards entering that conflict.

After reading this I got interested in researching more about the author since he is listed on this article as “The Late” Captain Vere Shortt.  I found another article (posted below) about the Foreign Legion he wrote that appeared in an issue of Chamber’s Journal of 01 August 1914.  In this article he states that he is an ex-legionary which would have him serving in the Foreign Legion, in Africa, before the outbreak of the war in Europe.  I discovered that Shortt penned a novel in 1915 called The Lost Sheep.  It is about an English officer who grows broke from too much high living and joins the Foreign Legion and serves in Africa.  A second book, The Rod of the Snake was partially completed but unfortunately Captain Shortt was killed in battle at Loos in September of 1916 before he could finish it.  His sister completed the novel and published it in his name posthumously.  An interesting thing about The Lost Sheep is that it was also published in the July 1915 issue of the popular pulp Short Stories (v84 #1 No. 302).   This would make it one of the earliest Foreign Legion pulp stories and beats out Chiquita of the Legion by three months.  A small review of the The Lost Sheep was found in the Australian newspaper (The Adelaide) from 17 April 1915 and another in The Outlook of 07 April 1915 and I’ve posted them below.  It appears the article above may have been written from his research into his Foreign Legion novel and was eventually published after his death.

UPDATE:  After more research I found that Captain Vere Dawson Shortt was born at Moorfield, Mountrath, Queen’s County, Ireland (now County Laois) in 1874 and was killed in the Battle of Loos on 27 September 1915 while serving in the 7th Battalion of the Northhamptonshire Regiment.  He is memorialized at the Loos Memorial at Pas de Calais France.  Prior to WWI he had experience in South Africa as a cavalryman in the Cape Mounted Rifles and during the Boer War with “Steinacker’s Horse”.  Shortt’s book, The Lost Sheep, has finally been digitized and can be found at the internet archive here.   JPW 08 April 2017 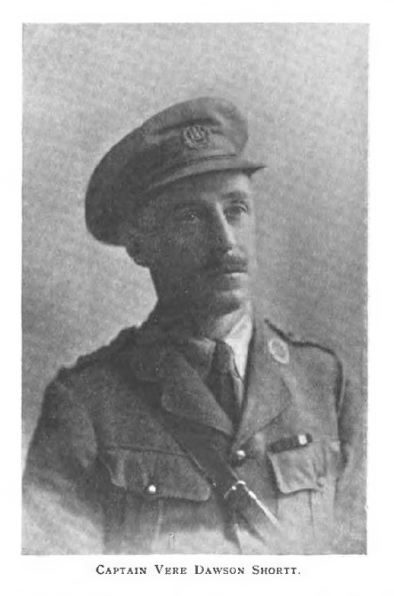 Some Stories of the Legion 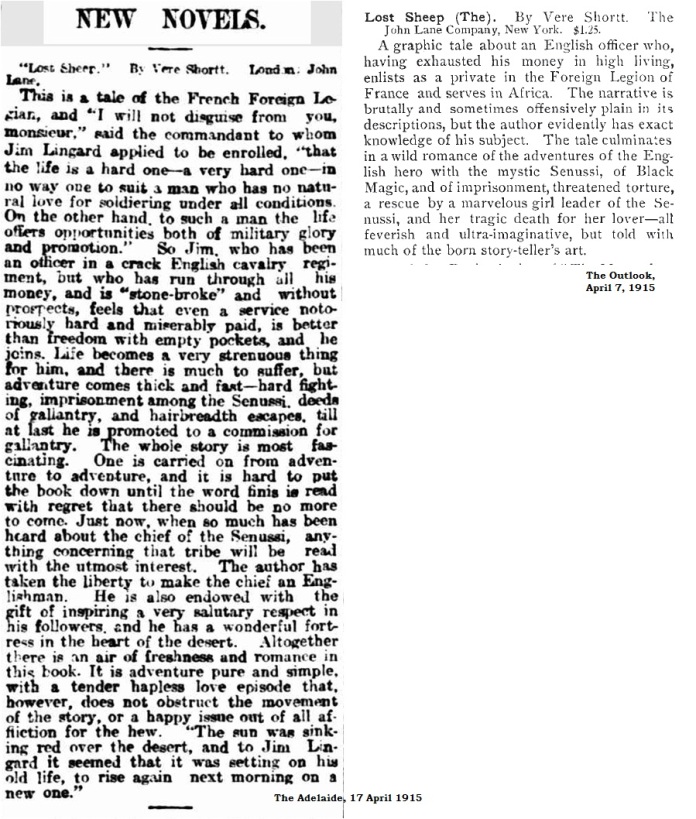