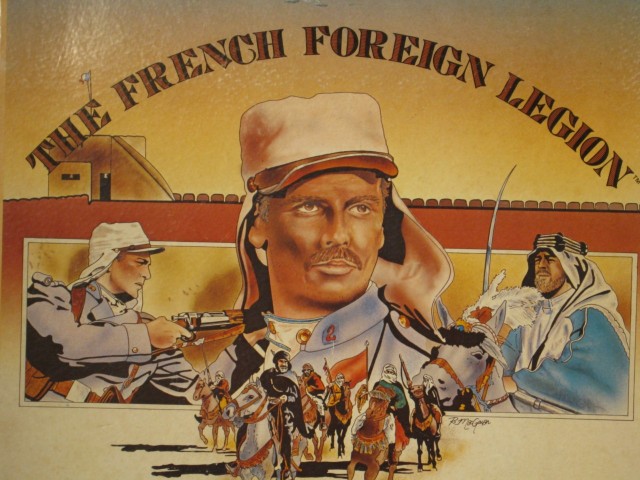 Back in the 1970’s and 80’s I often played several of the “Avalon Hill” type war games–the kind that had a colorful map with a hexagonal grid and cardboard counters to depict units, troops and equipment and some dice.  Some of the best, in my opinion, were those that were easy to play.  My favorites were Avalon Hill’s PanzerBlitz and Panzer Leader, The Russian Campaign, Wooden Ships and Iron Men and Waterloo.  I had also went whole-hog on Squad Leader but those rules were just so mind numbingly complex that I had to write simple house rules to make it playable.   I also liked the games released by the Strategy and Tactics Magazine (the game came with the magazine every other month) and those from Yaquinto (Fast Attack Boats, Roaring 20’s, Close Assault and Swashbuckler).

There are about four tabletop hex and counter games that feature the French Foreign Legion that I’m aware of.  I don’t have any of them (so this post is not a review) and they all appear to be out of print and on the rare occasions when they pop up for sale they are asking for a small fortune.  I hope someday to get a chance to play some of these and post a review.

1.  Yaquinto’s French Foreign Legion.  This is one of Yaquinto’s album games that came packaged in a type of record album cardboard cover.  Board Game Geek website has loads of pictures and information about the game. This looks like a most interesting and fun game to play.  Each counter represents either a legionnaire or attacking Bedouin tribesman while the map depicts a Legion desert outpost.

2.  Strategy and Tactics (S&T) Magazine’s Campaigns of the French Foreign Legion.  This game features two paper maps depicting the terrain of North Africa, Dahomey and Tonkin.  Players can fight these three campaigns utilizing three sets of counters for each.  (Note: The maps can be frustrating to use–you have to get the creases out and get the map to lay as flat as possible).  It looks like a pretty historically accurate game.  Also the good thing about S&T games is that they also have lots of articles in the magazine that explain the actual historical battles featured in their enclosed game.  Board Game Geek link. 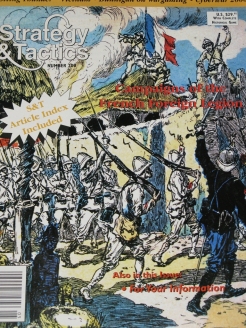 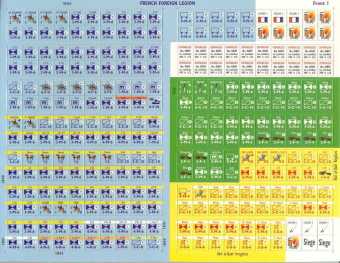 Retired Army.
View all posts by Jack Wagner →
This entry was posted in War Games & Rules. Bookmark the permalink.