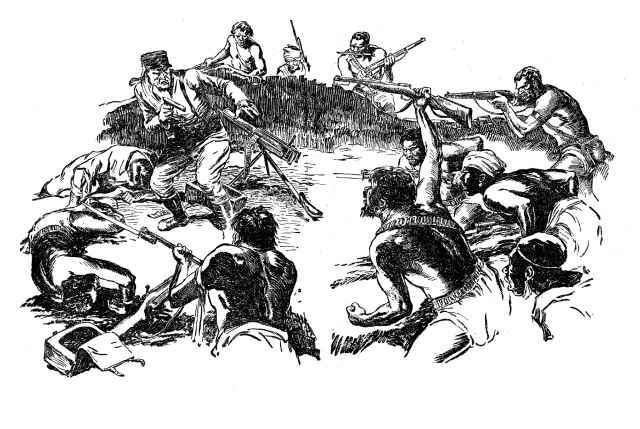 Glory Road appeared in Argosy in two parts–in the 27 July and 03 August issues of 1935.  This month we have the first part of a story that is a very typical tale from the prolific pulp writer and Foreign Legion fictioneer Robert Carse.  It seems to be a theme with Carse to write stories that involve wholesale massacres of various Foreign Legion detachments (among other French colonial forces).  Such is the case in Glory Road where Lieutenant Bowan’s Legion section is wiped out alongside a company of Tirailleurs Sénégalais  by a marauding harka of  ‘R Guebait tribesmen.  Only Bowan and the Seneglese commander survive by the timely intervention of the ‘R Guebait’s freed captives.  From here the adventure really begins as the two French officers head south to exact tribal revenge on Arab slavers and an ancestral enemy.

The time period selected by Carse for this story seems to have been contemporary–the mid-1930’s.  During this time the real Foreign Legion was indeed actively patrolling far into the Sahara and waging a hit and run campaign against the Reguibat tribesmen in what is now Mali and Mauritania.  The second part of this story will be posted in October (I know that sucks but serialization was something pulp fiction readers had to get used to).