Here is my monthly roll up of French Foreign Legion related odd and ends.

1.  Pete Seeger–Folk Singer / Uncle Alan Seeger–Legionnaire.  Here is a connection that I was not aware of until the recent death of Pete Seeger, the celebrated American folk singer who passed away on 27 January this year.  I had noticed a posting on the Shorpy web page about “Professor Charles Louis Seeger and family.” (another posting here).   I thought this was a real interesting picture and story so I looked up Charles Seeger and found his bio on Wikipedia made mention of his poet brother, Alan Seeger, who was killed in France on July 4, 1916, while serving as a member of the French Foreign Legion.    So unlike the “Six Degrees of Kevin Bacon” game, I connected a popular American music icon to the Foreign Legion in two steps.  Pete – Uncle Alan – Foreign Legion.

2.  Fort El Moungar.  Three years ago, when I first started this blog I was fascinated with finding ruins of lost and forgotten, French North African forts.  One of those, Fort El Moungar, was a mere speck on the overhead photo of the parched Saharan desert at the time but it did have the shape of a small fort and was in the spot where the American JOG (Joint Operations Graphic at 1:250,000 scale) map indicated a fort was located.  So I wrote a post on it as I assumed this was a permanent mark, or discoloration left on the sand of what was once  a small post.  Fast forward to March and I discover that Google has uploaded new imagery for their Google Maps/Earth applications and this imagery has much clearer resolution and shows a still standing structure in classic Saharan desert fort “style”. 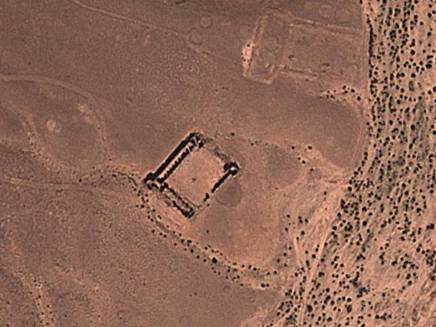 3.  Foreign Legion Books on eBay.  I’m a collector of Foreign Legion books and related paraphernalia and eBay has been a very good source for many of my small treasures.  Lately, I’ve noticed several very rare titles popping up for sale to include Jean Lartéguy’s very hard to find novels The Centurions, it’s sequel The Praetorians, Born to Fight by A. R. Cooper,  John Gibbons’ The Truth about the French Foreign Legion, as well as Operator 1384’s book called The Devil’s Diplomats, and several other Foreign Legion titles.  These are all being sold by the same seller at very steep prices.  However, if you read the listings it says that these are not original editions but rather a “trade paperback reprint copy”.  They are print on demand paperbacks of the original edition.  So before you shell out big bucks for what you think is a rare copy you should read the listing carefully to make sure that you will be satisfied with what you will actually get for the price.  ON THE OTHER HAND this also may be a great opportunity.  You may want to buy these books even if they are reprints as the original editions very rarely, if ever, appear for sale.  In my case, owning an original is not as important for me as the story inside so I’ll probably keep an eye out for something that I can add to my shelves.

4.  The Warrior Tradition Series: The French Foreign Legion.   This documentary is great.  It covers the formation and history of the Legion in a way not often seen in other documentaries.  It features significant commentary by historian Douglas Porch, author of the massive book, The French Foreign Legion: A Complete History of the Legendary Fighting Force, and first hand accounts of the Legion in WWII by John. F. “Jack” Hasey.  In fact it’s pretty much a complete history up until Dien Bien Phu.  The only lame parts were the odd snippets of actors in Foreign Legion costumes looking suitably distressed in the desert.  Better yet were the still pictures used in this film, many of which I’ve never seen before.  So if you have 40 minutes or so this is well worth the viewing.