Sorry for the lack of posts this month.  I’ve been busy with work and other projects and I often get home in a vegetative state of mind, not wanting to do much of anything else but watch politics on TV before bed.  It must be S.A.D. / Seasonal Affective Disorder.  Anyway, here are some tidbits of stuff I found on the Foreign Legion this past month…

1. Avalanche Kills Six Foreign Legion Soldiers.  Horrible news from Savoie, France as five Legionnaires from the 2nd Engineer Regiment (2REG) were tragically killed in an avalanche while conducting training on Monday the 18th.   A sixth Legionnaire passed away from his injuries on the 25th.  A memorial for the fallen was held last week.  Rest in Peace.

2. Edmonde Charles-Roux.  A great Frenchwoman and close friend of the Foreign Legion passed away on 21 January.  Charles-Roux, at age 19, served as a nurse for a Foreign Legion ambulance unit when the Second World War broke out.  Wounded in action she was made an honorary corporal of the Foreign Legion.  In 1944 she joined the Free French forces as head of military social work and was with the First Army and her beloved Legion units throughout the savage winter fighting in Alsace-Lorraine and Germany.  She was wounded a second time in the last part of the war and was awarded the Croix de Guerre and made a chevalier of the Légion d’honneur.  She would later become a writer and journalist covering art, fashion and culture, creating the fashion magazine “Elle”.  She would often remind people that she was “a Foreign Legion corporal twice wounded under fire”.  The Foreign Legion provided and honor guard for her memorial service.

3.  Planet Figure.  This is a great forum for those hobbyists dedicated to creating beautiful military, historical and fantasy figurines.  I decided to run some searches there and found some really awesome figures.  I borrowed some images from there but I must recommend you thoroughly check out the whole forum as there are hundreds of very accurately painted military figures.

4. Unfeasibly Casbah.  Here is a new building from Unfeasibly Miniatures.  I really like the style and the odd way the buildings connect together.  A couple more building sets of this type and you can construct a good replica of any Arab souk / kasbah.  These walled in older portions of North African cities are generally unnavigable warrens of narrow streets, walkways, alleys and passages.  The place were Legionnaires go when they are told not to, searching for those small cafes where the dancing girls can be found.  A great addition to their increasingly large line of Legion and Tuareg miniatures. 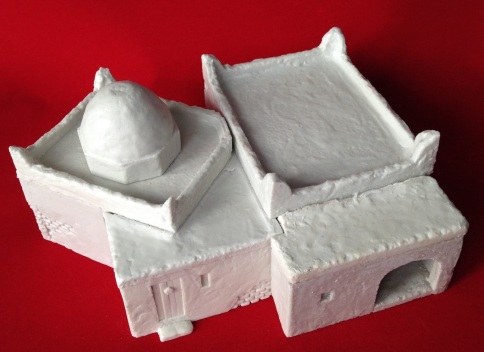 5.  Legion Patria Nostra Photo Gallery.  Here is another set of photographs by Eduard Elias.  These pictures capture Foreign Legionnaires in various activities in garrison, in training, during various ceremonies as well as during their off time.  I hate to say this but these guys look very much like young soldiers in most other armies.  Not too many bearded, bemedalled, grizzled old anciens in these pictures.