Here are some random comments on these great pictures.  I’ve downloaded each photograph from these two albums and here is the breakdown.

Album 1 (Fremdenlegion in Algerien 1930er Übersicht und Postkarten).  This album has 82 images and provides and overview of the album by pages and individual scans of several postcards.

Album 2 (Fremdenlegion in Algerien 1930er).  This album has 382 images.  Each is a high resolution scan of the individual photographs found on the 54 interior pages of the album.  I roughly organized the photographs into the following main categories.

Some Observations:  It will take a long time and some serious detective skills to add more context to these pictures.  Questions that I’m working on include what unit was Leutener assigned to during his time in the Foreign Legion, what are the names of the forts, nomenclature of the vehicles and airplanes and what bases are depicted in the aerial photographs.

1. German Army Service.  If you viewed all the pictures in the album you will notice a sudden transition from the uniform of the French Foreign Legion to the uniform of the early WWII era German Army.  There are 17 pictures depicting soldiers in what appears to be mountain troop smocks and the uniform of the Deutsches Afrikakorps (DAK).  I suspect that Leutener left the Foreign Legion in late 1934 after his five years were up but was later drafted into the Wehrmacht for service in North Africa in 1940.  Perhaps he was selected for service in the 361st Reinforced Infantry Regiment which purposely selected former German legionnaires for their knowledge of the desert terrain of North Africa.  This regiment was part of the 90th Light Infantry Division which did have several specialized units trained for commando and mountain type operations.

2. Unknown Insignia.  I noticed several pictures of men wearing a pocket insignia shaped in an upside down triangle.  I checked my references on Foreign Legion badges but could not find a match.  I suspect it might be a transportation company badge. 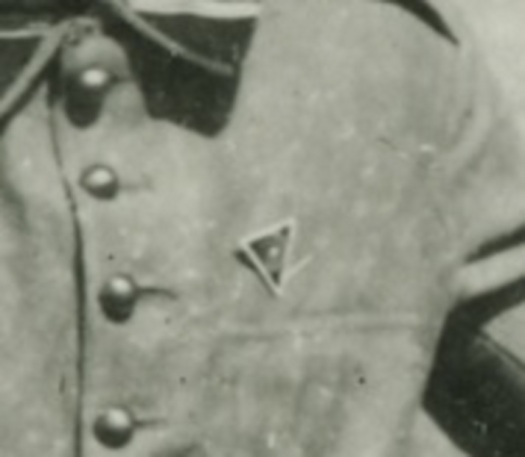 3. 1932 Train Crash.  There were two photographs related to the tragic train accident that occurred in 14 September 1932.  A train carrying 500 members of the 1st Regiment rolled down a hillside and killed 62 legionnaires.  The cause of the accident was heavy rains that weakened the track.

4.  Complete Mysteries.  There are some photographs that really need more explanation but unfortunately Legionnaire Leutener did not write much in the margins of the albums or on the photographs themselves.  The picture below stumps me completely.  It appears to be an assembly of prisoners of war but there are very few guards.  The uniform (greatcoat and garrison caps) does not look French but I think these men could be some of the survivors of the train crash noted above.  Also, 1934 is a bit early for the large Spanish influx of Legion recruits that occurred in 1939 so I don’t think these men are from that civil war. 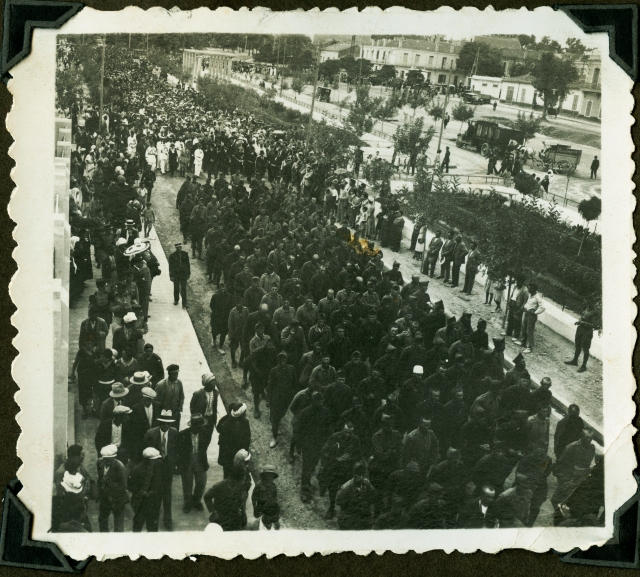 Retired Army.
View all posts by Jack Wagner →
This entry was posted in Photographs. Bookmark the permalink.