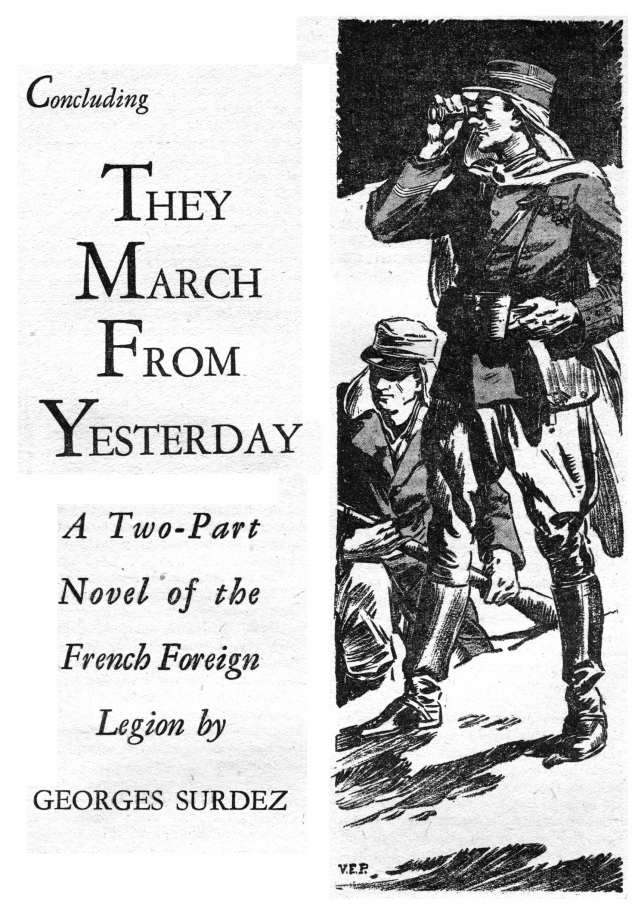 As promised, here is the second part of this Georges Surdez story which was published in the March 15th edition of Adventure.  I promised to post this in less time than the original readers in 1930 had to wait for it and mistakenly thought I had 30 days but as I was scanning suddenly realized that this magazine was publishing twice monthly (two issues a month from April 1926 to May 1933 and three issues a month from October 1921 to March 1926 !) and that if I wanted to follow up with the second half of the story I needed to post it ASAP.  So here it is…

Update (6 April 2017):  I finally got around to reading this story.  Bottom line is that the two parts never became one story and it seems likely it was originally two completely different stories that the editors forced Surdez to combine into a two-part serial.  Nevertheless, if you can just accept the incongruity of 80% of the plot ending in Part 1 and being replaced with 80% of new plot material in Part 2 then it is well worth reading (both parts).  The plot(s) are boiler-plate but there are several parts of this this story (especially in Part 2) that I think contains the best writing by Georges Surdez about the spirit of the French Foreign Legion and which directly explains the title “The March from Yesterday”.

For example…“Legionnaires came from all races to form a race with customs and traditions of its own.  From all creeds to learn one creed.  They were bound by a common link.  Whether driven from a place by the shifts of fortune brought by war or from a hut by hunger, from society by a prison sentence.  They came and took a common destination, a trail they followed without swerving.  They were marching from the past, marching from yesterday.  Few cared to look back, plodding on in the present, forgetting the past, careless of the future.

And this…“Yesterday- poverty, shame, honor and sorrow, left behind at each turn of the path in Algeria, Syria, Tonkin, Morocco.  Each stride was a shovelful of earth on the grave of the past, a past which had its ghosts but no longer substance. Yesterday, sacred to the Legion-often cursed but always sacred. Information from within? No; the code that regulates men living under roofs with full bellies and soft beds did not hold here.”

Good stuff here with plenty of character development and combat action against the Rif as well.

Retired Army.
View all posts by Jack Wagner →
This entry was posted in Pulp Fiction Stories, Uncategorized. Bookmark the permalink.

1 Response to Legion Pulp: They March From Yesterday (Part 2)