Sorry this is a bit late.  I’ve been busy enjoying the last days of summer before school starts next week.  Here are some interesting things about the Foreign Legion I’ve came across this month (not much).

1.  Foreign Legion Visits America (1918).  The photograph below depicts several of the officers of the Foreign Legion delegation that traveled to the United States in late 1918 to promote the Fourth Liberty Loan.  They are meeting with various representatives of the Native American tribes during one of their stops at Oklahoma City.  The picture was kindly brought to my attention by Leonard and it was posted to this Facebook page “World War 1 Native American Warriors“.  There were some questions as to it’s origins since the press annotated the event as taking place in Dayton Ohio but this was actually taken at the Fairgrounds of Oklahoma City with the grandstand seen in the background.  I’ve also attached another photograph from the February 1919 issue of Le Miroir that shows Captain Chastenet de Géry greeting one of the chiefs. 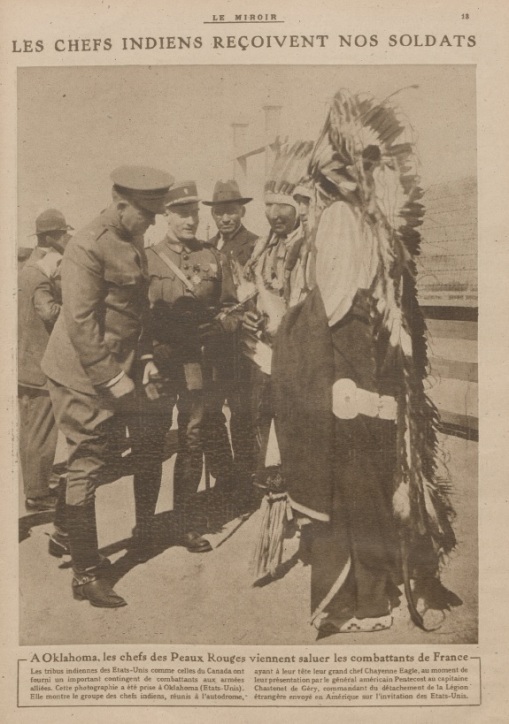 2. Action in the Desert.  The following pictures depicting a tabletop display of some hot desert combat were provided by “Villou” a follower and frequent commentator on this blog.  You can see two classic terrain pieces–the Airfix Foreign Legion Fort and Italeri’s Arab House.  Also waging war are figures from several lines of miniatures to include Hat Zouaves (I think), Airfix Legion and Arab figures, ESCI/Italeri’s Arabs and ESCI/Italeri British (Zulu) Infantry converted to artillerymen and officers.  Well done painting job on all.  Thank you sharing these.

3. Afghanistan War . French Foreign Legion . French Restrepo. This is a four -part video posted to YouTube that gives some interesting views of Foreign Legion Operations in Afghanistan.   The quality is not so great but worth a quick look.

Retired Army.
View all posts by Jack Wagner →
This entry was posted in Hodgepodge. Bookmark the permalink.

1 Response to Hodgepodge for August 2017