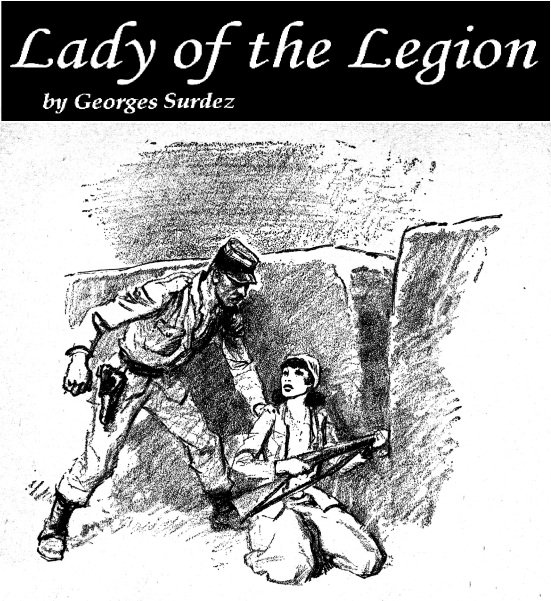 OK.  This is now fixed.  The links below will take you to parts 2 and 3 of this story.

Lady of the Legion Part 2

Lady of the Legion Part 3

Lady of the Legion is a fine story that takes place in a small isolated desert post (Poste Moziba) manned by 30 legionnaires and Lieutenant Torval.  The fort and the men inside become caught between a vengeful Arab agha and his amassed warriors who seeks to redeem his honor be recapturing his runaway bride-to-be and their higher HQ who order the Torval to return the mysterious Louise Souvain to her tribe.  Louise sought shelter with the French after escaping her arranged marriage but the Legionnaires vow to fight to the death in order to protect her because to give her over to the Arab chieftain means certain death at the hands of her spurned groom.  It is the only way to regain his lost honor.  However, is Louise telling the truth that she was captured as a small girl from a French merchant family and raised in the tribe as one of their own?  Or is she really a part Maltese-Berber maiden who does not want to be sold off into a marriage she doesn’t want and is pretending to be French.  Eventually the besieging tribesman attack the fort but are beaten back time and time again. Can the Legionnaires hold out and why should they even risk their lives over a girl who may not be who she says she is?

NOTE: This scan is not in color like the first part which was done by another, very good, scanner (SAS).  I scan in color but convert the final into black and white so I can print it out for reading and to then save in my collection.