Legion Pulp: The Battle of the Soap 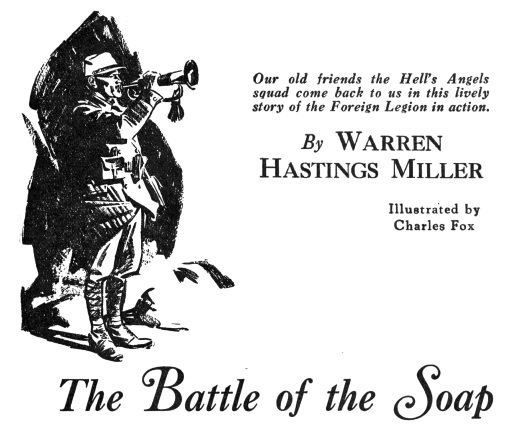 This is the second pulp fiction story by Warren Hastings Miller featuring his Hell’s Angel Squad that I’ve posted here.   This one, like all the others in the series, was featured in Blue Book Magazine.  This one is from December 1934.  The Hell’s Angels are lead by Sergeant Ike, an American Legionnaire.  The rest of the squad consists of Criswell (from Michigan), Anzac Bill (Australian), Di Piatti (Italian), Mora (Spanish), Rutli (Swiss), and Calamity Cyclops (?).  This time they have become part of the Legion’s long range Mounted forces  (Compagnies Montées de la Légion étrangère) but unlike the other mounted units who rote mules the Hell’s Angels Squad is mounted on native horses and equipped with automatic rifles.

The Battle of the Soap

The Hell’s Angel’s Squad series ran for 20+ short stories from July 1927 to December 1934.  It is a great series of stories and all were very well illustrated to the usual Blue Book standards. Miller clearly knew his stuff when writing about the French military and North Africa.  The Battle of the Soap was the last story of the series according to the Fiction Mags Index.  The good thing is that you can now enjoy 10 of these fast paced stories in Issue #172 of High Adventure that was published back in May.  This is a nice 7″ x 10″ paperback with glossy covers and 112 pages of interior goodness.  Amazon also sells this with free Prime shipping.