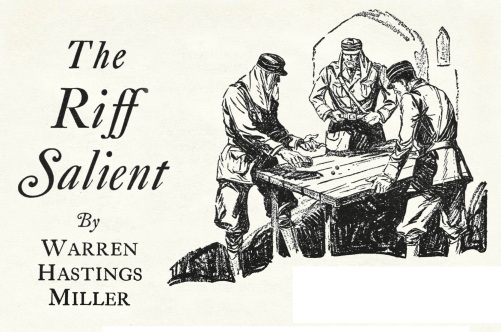 The Riff Salient  is from the experienced pen of Warren Hastings Miller and appeared in the July, 1928 issue of Blue Book Magazine.  It’s one of Miller’s Hell’s Angels Squad stories and features Legionnaires Anzac Bill, Ike Smith of Texas, and some other characters who make appearances in this series such as Little Hortet and Commandant Knechet. It is set in Morocco and concerns the French dealings with the rebellious Rif tribes of the day.

NOTE:  Sorry for the delay on this month’s pulp story as I’m currently having some significant issues with my computer.  Back in August I started experiencing random 100% spikes in my Hard Drive usage that, when it occurs, locks up any app I’m working in to include various picture editors, browsers, Windows file explorer, MS Office programs, etc.  I get the (Not Responding) warning constantly and sometimes the screen locks and programs crash.  Its now getting worse and is so frustratingly  irritating.  I try to do what I can between these random spikes but I’ve corrupted some programs (like Adobe products) in trying to shut down as much background services as I can.  I have tried just about every trick and recommendation to fix the problem but with no success.   I’m at a point where my choices are a clean Windows 10 install, a new hard drive, or just bite the bullet and get a replacement for my Dell XPS which I discovered is over 10 years old.   …maybe it’s time to let old Betsy go to pasture?