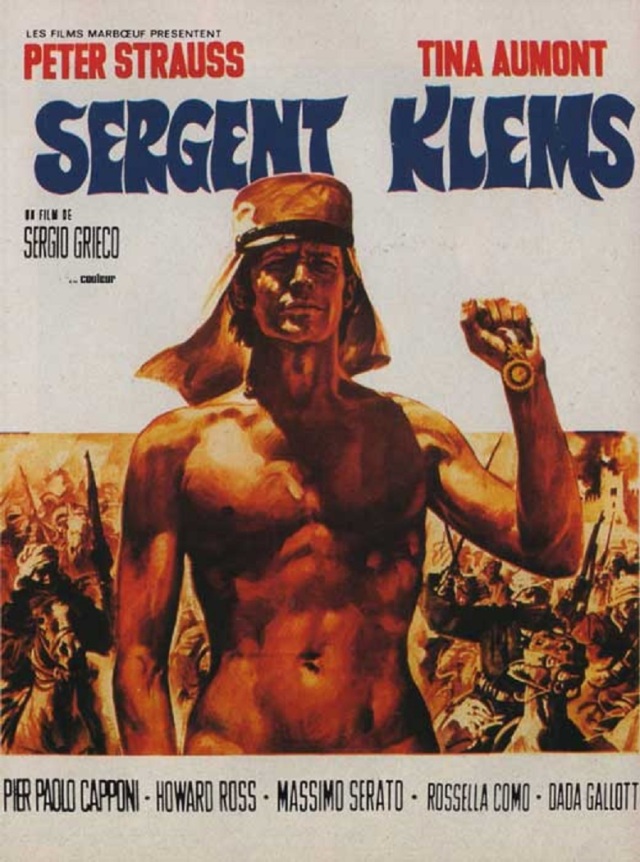 Like many veterans I can’t sit through a war movie without nitpicking the weapons, uniforms, tactics, jargon, or history.  With Foreign Legion movies however I’m actually a bit more forgiving since I expect technical and historical inaccuracies–kind of like watching a western.   Sergeant Klems is a movie that had many positive things going for it–things that made me smile and think “that’s neat” or “that looks real”.  Sergeant Klems was filmed on location on Morocco, it pulled together a large cast and hundreds of extras, it had decent technical details on the uniforms for both the French and the Rif tribesmen, a decent plot, and the historical setting was very good and mostly accurate.  But it also had many scenes that made me shake my head and say “WTF, Over”.  For everything they got right in this movie there was something wrong–like the fat Legion NCO with hippie hair that we first see betting on a scorpion fight (and then eating them when he loses).  The weapons depicted were great until you see an MG34 (?) being used from the top of an M4 halftrack in what was supposed to be 1927.   Even the North African fantasia, a horsemanship competition/display, turns into some weird contest of Islamic-Berber “death before dishonor”.   Also the plot progressed at a very haphazard pace–too much time spent on inconsequential scenes and then suddenly there is violent battle and then followed by too much time spent on another unnecessary scene.  But like I said–I didn’t expect much from this movie but it leaves me wondering why smart efforts made to create a good movie always seem to be wasted by poorly thought out scenes, ill-fitting characters, stupid dialogue, and poorly plotted continuity.  I said virtually the same things in review of the Jean Claude Van Damme movie-Legionnaire–great potential sabotaged.  (My viewing pleasure was also hindered by the quality of film that I had–a scaled down letterbox version of poor quality with even worse dubbing and sound.)

The plot was decent enough–beginning in the trenches of World War One we see a German soldier struggle through the mud and debris and (apparently) take the identity of a fallen comrade (though you couldn’t tell what was going on).  Flash forward to Guercif, Morocco where the same former German trench fighter, now known as Otto Klems, has been in the Foreign Legion for the past six years or so.  An outstanding soldier, he is promoted to Sergeant but later experiences disillusionment after being accused of letting a prisoner escape by his commanding officer–an obviously creepy sexual predator who repeatedly has his queer advances rebuffed by Klems.  Klems eventually deserts his unit to meet the wife of the man who’s identity he has stolen.  This doesn’t pan out to anything as far as the plot goes and Klems then flees into the desert where he is captured by Rif tribesmen.  He eventually becomes a military adviser to the rebels who handily route the Spanish forces controlling their homeland.  Then the French get dragged into the conflict and we see Klems leading Rif tribesmen against his former comrades in the Foreign Legion.   Along the way he gets married to the daughter of Abd El-Krim.  He eventually is captured by the French and is sent away to Devil’s Island where he supposedly dies of gangrene.

Sergeant Klems is actually based on the real events and exploits of Legionnaire Josef Otto Klems who actually deserted the Foreign Legion and joined the Rif rebels in Morocco.  He became one of the key advisers to El-Krim’s forces and was “most wanted” by the French.  Accounts differ on who Klems actually was, his rank in the Foreign Legion, his role in the Riffian rebellion and even his capture and subsequent demise in captivity.  In Foreign Legion fiction there are plenty of Sergeant Klems’–men who defect to the tribesmen for gold, revenge, or because they were rescued in their attempt to escape their service to the Legion.  Even P. C. Wren explored this role of “going native” with his novels Beau Sabreur and Beau Ideal.   I’m gathering what I can about Klems and hopefully have enough to put together a post on this controversial legionnaire.  (some screenshots below–poor copy = poor quality).

Retired Army.
View all posts by Jack Wagner →
This entry was posted in Movies. Bookmark the permalink.