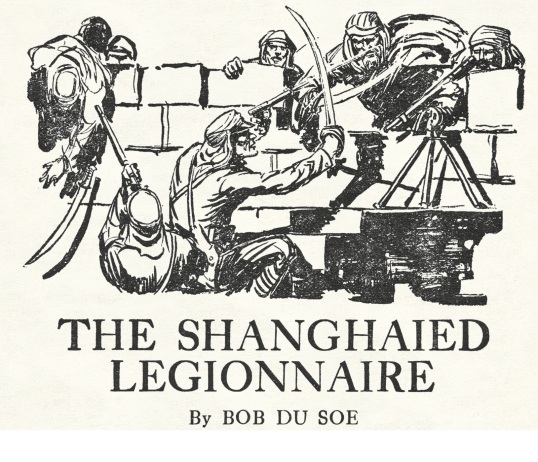 Sorry for being so tardy again on posting.  I’m putting lots of extra time in at work and correspondingly have gotten way behind on my extracurricular hobbies such as blogging as well as reading.  Things should slow down in November when the office gets their new supervisor and I can stop filling in where I can.

…but I didn’t forget that today is the middle of the month and therefore present another long forgotten pulp story of the Foreign Legion.  This one appeared in the October, 1929, issue of Frontier Stories.  The author is Bob Du Soe (Robert Colman du Soe).  Fictionmags Index‘s thumbnail biography says that Du Soe (1892-1958) was “born in Los Angeles; educated at Columbia University; newspaperman on the Hawaiian Islands; naval aviator in WWI and contributed fiction to numerous magazines“.  His specialty genre was adventure and so he wrote many Foreign Legion stories as well as all sorts of military, nautical, exploration, historical pieces and even a western or two.  His Legion tales are well done but do not come across as rich in authentic detail as those written by Georges Surdez or Robert Carse.  Bob Du Soe clearly opts for more action over character development which is exactly what the readers wanted to see in their pulps.  This is one of his longer stories at 32 pages.