The Original Foreign Legion in Algeria and Spain 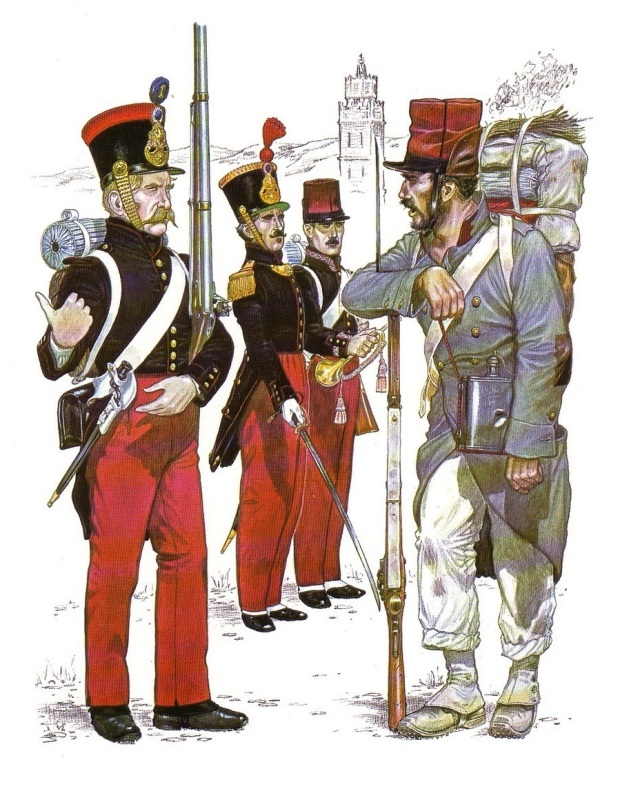 The Foreign Legion was founded in 1831 as an expedient way to remove “nefarious characters of questionable loyalties” from France by inducing them to join a military corps that had a very high chance of seeing immediate combat and great possibility of loot.  Almost immediately this Corps was sent to North Africa to participate in the ongoing French conquest of Algeria.  Four years, and several hundred casualties later, the Legion was sent to Spain to support the Spanish government against Carlist rebels.  It was in Spain in 1839 that the first Foreign Legion was ultimately dissolved when their numbers were reduced to a couple hundred (63 officers and 159 of an original 4,000 returned to France).  While the first Legion steadily deteriorated in Spain, having been sold (abandoned) to Isabella, their reinforcements were instead diverted to form a second Foreign Legion in 1836 and this new Legion was sent back to Algeria to continue pacification of the Berber and Bedouin tribes.   Pacification and continued fighting continued in Algeria until 1848 but the Foreign Legion would remain based there until 1962.

It is within this historical setting that we find the following two articles that appeared in Fraser’s Magazine in 1848 (v37 1848 Jan-Jun).  Both relate to a pair of books (Bilder aus Spanien und der Fremdenlegion and Bilder aus Algier) written by a young Danish journalist and former soldier named Von Rosen who endeavors to join the Foreign Legion and make his career as a fighting man.  The first article entitled “Modern Condottieri” appeared in the January 1848 issue and recounts Von Rosen’s experiences fighting in Spain with the Foreign Legion.  The second article–“A Campaign in Algiers“, that appeared in the May 1848 issue, is the more insightful of the pair and relates more to his time in the Foreign Legion.

In June of 1834 a young Von Rosen enlisted in the Foreign Regiment at Toulon, posing as a Dane named Frederick Frederick, and three weeks later is sent with 60 replacements for the Foreign Legion battalions in Algeria.  He promptly experiences much drudgery and toil in Algeria and very little fighting while serving in a Foreign Legion that is remarkably consistent in so many ways to the Foreign Legion of more modern times.  We have an account of his enlistment and service which sounds very much like that written by other Legionnaires such as George Mannington or Frederic Martyn.  There is the obligatory carousing in Marseilles, the attempt of a senior officer to warn and discourage enlistment, the initial reaction to fellow recruits and the account of his arrival and experiences in Algeria.  He toughs out soldierly privation in North Africa as well as plenty of hard labor with pick and shovel but being a man with some money to spare he is able to influence his immediate superiors to make his life in the Legion a bit easier than his comrades.  He also relates his encounters with amazingly diverse number of fellow Legionnaires with several cutthroat NCO’s and humble noblemen hiding among the ranks.  Eventually he is shipped off to Spain to fight against the Carlists and expresses some regrets for ever thinking that service for Isabella would be better than drudgery in Algeria.  He was wounded several times in fighting against the Carlists but would finish his three years in the Foreign Legion in Spain as a Sergeant.  He was one of the few survivors of the original Foreign Legion to make their way back to France.  Upon crossing the frontier the Legion remnants were approached by a recruiting officer enticing them to enlist in the “new” Foreign Legion then embarking for Algeria but after being abandoned (sold) to Spain the veterans were not quite ready to be fooled again and Von Rosen made his way back to Denmark.  He eventually tried again to make a military career in the civil wars of Spain and returned there to seek a commission but this didn’t pan out for him and he returned again to his home country and wrote his two memoirs of his time in Algeria and Spain.

One thing I find remarkable about this account is that the German-Danish journalist is named (Von) Rosen.  Rosen is the same surname adopted by a young German-American named Erwin Carle when he joined the Foreign Legion in 1910 almost for identical literary and personal adventurous reasons.  No mention of the earlier Von Rosen can be found in Carle’s book In the Foreign Legion but I surmise that this name was chosen by Carle based on his knowledge of the writings of the earlier Rosen.  These two articles provide a unique and seldom found insight into the very first nucleus of the French Foreign Legion–those 4,000 men who first fought in Algeria and were then left to fend for themselves in Spain as ill paid mercenaries.  Von Rosen’s books are available but they are in German.

A Campaign in Algiers

Retired Army.
View all posts by Jack Wagner →
This entry was posted in Articles, History. Bookmark the permalink.

3 Responses to The Original Foreign Legion in Algeria and Spain